It is the season of the sting in South Florida beaches.

Be warned and you will be fine.

You do not want to go near these creatures. 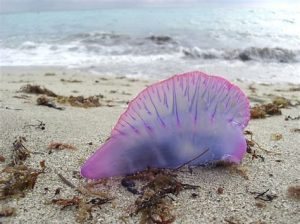 “Pretty blue balloons with nasty stinging tentacles have washed up on South Florida’s beaches, with the arrival of Portuguese man-of-war season.

Lifeguard stands across the region are flying purple sea pest flags, as ocean winds blow these unwelcome visitors toward shore. On Sunday alone, lifeguards in Hollywood treated 204 people for stings.

Winter is the season for their arrival, and no one is claiming that the numbers are unusual for this time of year.

“They’re washing up on the beach, but nothing crazy,” said Bob Lemons, spokesman for Boca Raton Fire Rescue Services.

A smart tourist is a safe tourist

The majority of victims appear to be tourists, said Sandra King, spokeswoman for Pompano Beach. On Friday, for example, a child from out-of-town picked one up and popped the balloon, ending up with severe stings.

“Within 15 minutes, my son got hit on legs with the tentacles of a small blue meanie, then my husband’s feet,” she said in an email. “My dog came out of the water yelping. He immediately started licking his underside. He was also very curious about the huge ones on shore, and we had to keep pulling him away from them since we know you can still get stung.”

So what do you do?  Here is some advice.

She rinsed off the stings and gave everyone ice in the car.

“Once home, our dog jumped into the cold water of our pool and sat on the top step for a long time,” she said. “I believe the cold water made the stings feel better.”

They’ve been common on the beach since the winds shifted inland about a week ago.

Like related species such as jellyfish, corals and sea anemones, Portuguese men-of-war use tentacles with stinging capsules to capture prey, ranging from plankton to small fish. They typically live in the Gulf Stream and don’t want to come near shore any more than we want them there, but they drift at the mercy of wind-driven ocean currents.

Although the stings are rarely dangerous, they can be extremely painful.

The professional advice  to do if you get stung and how NOT to get stung! 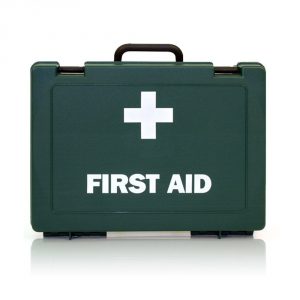 — Stay clear of them. Their tentacles can extend up to 30 feet. Remember, a beached man-of-war can still sting.

— Rinse the affected area with seawater to remove any stinging barbs.

–Don’t try to remove the tentacle with your bare hands. Use a towel and gently unwrap it away from your skin,

— Treat with vinegar or hot water, not cold water. Later, use ice to ease the pain.

— Use Benadryl oral or topical cream